Enter your search keyword
Beamforming & Directionality – What is it and what does it mean for my hearing?
05/04/2018 - Hearing Aids - Hearing Loss
Go back
Share this

Hearing devices can be great – they’ll restore lost relationships, allow you to rediscover nostalgic noises, or even help you order your food – but how do these magical little devices work? There are many different technologies packed into a hearing device, most of them being differences in ‘software’ as opposed to ‘hardware’. Software in relation to hearing aids is, put simply, the programs that your hearing aid uses to distinguish important sounds you would like to hear from the abrasive or unimportant sounds you don’t want to hear. All manufacturers have their own specialty when it comes to their software, but they all use one clever tactic to help you hear voices in loud scenarios – called directionality, or beamforming depending on subtle differences that won’t be covered in this article.

Directionality is a feature that helps localization – a natural function of the ear/brain that helps speech understanding in noise. Normally, a listener can locate the direction of a speaker up until ambient noise is louder than the speaker. The metric used to determine how loud a speaker is versus the ambient noise in the scenario is called Signal to Noise Ratio (SNR). The speaker’s voice represents the ‘signal’ and the ambient noise represents the ‘noise’ part of the metric. When we examine an individual with a hearing loss, usually they cannot determine the direction of a speaker at regular signal to noise ratios, meaning that if they have a conversation with someone in a loud setting, a cocktail party for example, the words of the person they are speaking to would be lost in the crowd.

This is where the magic comes in. Hearing aids with directionality and/or beamforming can help to replace this function. See the following diagram, which represents the sound that an omnidirectional microphone would pick up, versus a narrow beam microphone that is forward-facing. 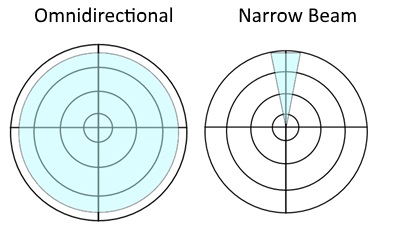 The omnidirectional microphone would pick up sounds from all around, meaning the listener would hear louder sounds, but not necessarily have an advantage when distinguishing one sound from another. Consider the narrow beam microphone, which prioritizes sounds coming from directly in front of the listener. It will help the listener distinguish the voice that they want to hear, even in environments where there is a significant amount of background noise. Of course, there are environments where the primary speaker isn’t in front of you – like listening to someone in the back of the car if you’re sitting in the front. To help with these situations, higher models of hearing aids offer directionality in multiple directions. Usually always including front, they can include front and back, or even front, back, left and right, covering all directions. We had the pleasure of trialing Siemens’ PureNX recently, and not only do they offer automatic switching between directionality modes, but they also let the user specify which direction they would like to listen from through an app on their smartphone. The experience of hearing a separate conversation depending on which direction the user chose highlighted the advances in hearing technology in the past years. We truly believe that people will wear hearing devices as an optional accessory instead of a hearing rehabilitation device in the near future, as they offer functions that simply aren’t available to the ear.